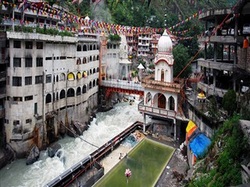 As India is known as the place of God. There are many places to see as tourist spot as well as to be religious. Click here for More Information of Manikaran. In many holy places and tourist spot are some rare.In that one place is famous as the holy place as well as tourist place named MANIKARAN .
It s a place that is famous for both  pilgrims and a holiday trip. MANIKARAN is a city located at the height of 1737m from sea level. It is a part of Kullu district of Himachal Pradesh a state of India. It located in Parvati valley of Himalaya range. In the South of it there is a river named Parvati and in the North Harinder mountain is standing to fight against evils. As it is said above that this place is holy for Hindu as well as for Sikh, so the name stated above Parvati and Harindra Is the holy name for both community respectively.
MANIKARAN is a unique holy place because it is holy for two communities one for Hindu and another for Shikh. It is one of the place where both community wants to go for at least one time in his/her life. As it is the holy places for both Hindu and Sikh, there are many Hindu temples and one Gurudwara situated in the city. 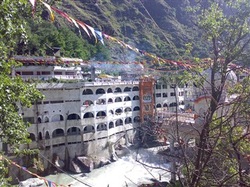 MANIKARAN has a story for its name, that why its name has been kept like this. According to the Hindu the lord Shiva and goddess Parvati were roaming in the Himalaya region, as Himalaya is the place of lord Shiva. There are a lot of Delhi Manali Volvo Services daily whole the year. They came across this place and tey saw this place was so beautifully, so they both decided to stay here for some days. In the mean while of staying goddess Parvati took bath, at that time her earring called "Mani" was lost. She tried to find but she was not succeed. Than this was said to lord Shiva, Lord Shiva gave his order to his attendants to find the jewel of the ear. But at last the attendants also did not able to find that jewel. Lord Shiva get angry and open his third eye, which is cause destruction at that place and a fountain of hot water appear with the Mani and may more precious jewels from under the earth. So, It has been named MANIKARAN. 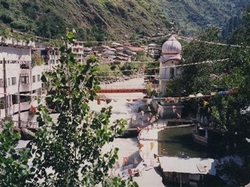 As above it is a belief of Hindu community like that there is a belief of Sikh community also with there god Guru Govind Singh. MANIKARAN best season is throughout year because in summer temperature is about 150c - 200c and in the winter temperature is about 50c - 140c. There are many hotel to stay and as for food we may get Indian, Chinese, Tibetan, Punjabi and continental.

Place of attraction in MANIKARAN is to see hot water spring, temple of lord Ramchandra and Shiva, Grudwara. From the temple of Lord Ramchandra we will get the view of the Dio Tibba Glacier, which is at the height of approx. 6100m.


About hot water spring it is believed that if anybody takes bath he will be cure from evils, and some the people realize it also that they have got rid from the evil. In the words of sciecne the water is mixed with sulphur which has ability to cure skin disease. In both what is the truth we can't justify. So don't think about that. Just have an look with the both point of view. Before going take advise to your travel agent they help you to arrange the all things you required along the journey.